An environment control device for a pump’s stuffing box that reduces flush and removes particulates, which damage pump seals, can double equipment life.

The Spiraltrac, manufactured by Enviroseal and distributed by FITT Resources, manages the fluid exchange within the stuffing box while capturing particles in its engineered spiral groove and reducing the buildup of solids around the seal.

This stops solids accumulation inside the stuffing box, which contributes to sealing equipment wearing out more quickly. 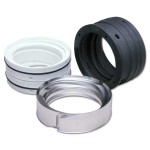 The Enviroseal device is suitable for either conventional packing or mechanical seals, though different versions must be used to address the requirements of equipment and each sealing method.

Each device is made to measure, so it can be installed in most rotating equipment where seal wear is an issue.

Generally, a standard stuffing box will have five rings of packing and a lantern ring, with flush capabilities so as to cool and lubricate the shaft. The pressure differential between the system and flush pressure helps to reduce solid ingress into the soft packing.

Flush costs can be expensive due to excessive sleeve wear, excessive flush flows and cost attributed to excessive dilution to the product. 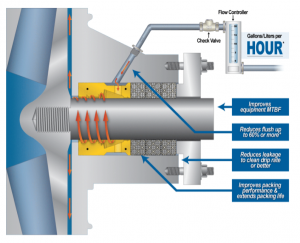 Additionally, there are significant maintenance costs due to frequent shaft sleeve and packing replacement and, in due course, excessive leakage.

The Spiraltrac packing version can resolve some of these problems by reducing flush rates and improving equipment reliability, which means less water consumption, less illegal dilution into processes that are sensitive to excessive flush, lower maintenance costs, and minimal time spent with equipment offline.

FITT Resources Director Jason Lynch said that during installation, the ring (or sometimes two rings) closest to the impeller and the lantern ring were removed and replaced with the Spiraltrac – a solid bush with a spiral groove.

Mr Lynch said, “What often happens is as packing consolidates, the lantern ring actually moves off its flush port, so the flush is not working optimally.” 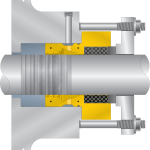 “With the Spiraltrac device, because it’s a solid bush, everything is securely in place, so the flush is always working.

“The Spiraltrac’s flow characteristics enable the flush to operate more efficiently, thus reducing the required flow as long as the flush supply pressure is at least 1 bar above the process pressure.”

A stuffing box adaptor can also be manufactured so sleeves that have been worn by packing done need to be replaced. The adaptor brings the new set of packing out onto the non-worn surface of the sleeve and the spiral groove runs over the top of the wear.

With standard mechanical sealing, particulates travel along the shaft inside the stuffing box and congregate around the seal, which results in the seal failing prematurely.

When Spiraltrac is used, the constant fluid exchange within the stuffing box prevents these particulates from building up around the seal face, allowing it to work in a clean environment. 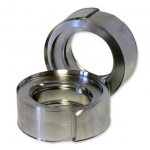 Mr Lynch said that the Spiraltrac also helped to regulate the temperature when used with mechanical seals.

“So as the pump is filling up, it is also venting the air out of the stuffing box as well.”

While running the device with packing requires a flush, the mechanical seal can run with a “dead head”, meaning it has no flush.

This allows FITT to put mechanical seals into harsher applications, parts of industry where dilution of the pump product is a problem, or areas where there is no flush and flush costs are very high.

Mr Lynch said that FITT Resources chose the right seal for the right job, with no bias towards mechanical seals or packing.

“It’s horses for courses. Good mechanical seals have a much higher cost of entry. But there may be applications, such as in mining or slurry pumping, where it just doesn’t make sense to keep throwing $5,000 to 10,000 at a mechanical seal every six months when the much cheaper packing option could most certainly do an adequate or equal job.”

The sealing solution depended largely on the needs of the individual client and application.

“A big driver for Spiraltrac is water reduction – certainly in the mining and mineral processing side of things – as water they put in many processes they’ve got to take out plus just the total cost of water.

“With flush, certainly, in packing, we can reduce flush rates by up to 70 per cent. So packing now has potentially massive savings.”

When coupled with Chesterton’s new generation of mechanical seals in some application we can remove the flush all together. We have proven in these cases that water saving can far outway the initial cost of the mechanical seal.

The Spiraltrac’s ability to mitigate the effect of solids had also opened up new applications that previously seemed impossible.

“We’ve been able to put the Chesterton 442C seal in with slurry applications with the Spiraltrac – we can put mechanical seals in with applications where previously we might not have even thought about it.” 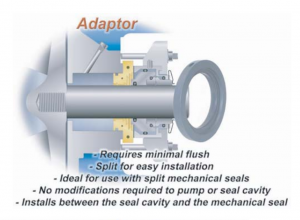 The device can have application in all industry ranging from water and sewage (silt, sludge and sand), to mining and mineral processing (slurries), where there are particulates that reduce seal life.

Mr Lynch said, “Broadly, you could say we’ve had many applications where we’ve doubled the life.”

“The Spiraltrac is revolutionary in it design. The software that designs the groove angles, entry and exit dimensions is very unique to Enviroseal.

“The product is not just a reverse thread, but specifically engineered using computer modelling, understanding the specific gravity of the products that we’re pumping,  and the particulate that’s in there.

“There’s been years of research and proving this technology. Perspex pumps have been used to understand what happens inside a stuffing box. Spiraltrac is specifically designed for the pump, the product and the particulate.”

FITT Resources offers several packages where the Spiractrac comes with the precut packing rings or packaged with a mechanical seal.