SIMTARS have officially approved the Labom CB2031 and 1031 pressure transmitters for pump stations and Longwall hydraulic systems right across Queensland.

Labom pressure transmitters, considered best practice for safety and reliability in the mining industry, have been officially approved by SIMTARS for use in Queensland mines. 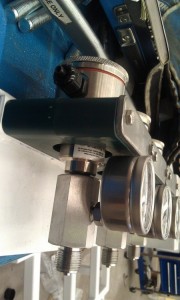 The Labom CB2031 and 1031 transmitters have been used for many years in NSW to control hydraulic pressure systems powering longwall machinery at underground coal mines.

The transmitters are German engineered, have an optional electrical M12 connection and, as fully sealed devices, they are virtually water-proof.

According to Mr Regan, the failure was due to the system’s pressure transducer being contaminated by water.

“Incidents such as this have the potential for fatal injuries as was the case in 2006 when a catastrophic high pressure hydraulic failure resulted in the death of a contractor. Risks must be mitigated at all costs,” said Mr Oakes.

Labom transmitters are encased in a solid stainless steel housing making them corrosion-free and protected from water contamination, as well as being resistant to the rough and tumble environment of the underground mine.

“The Labom transmitters are tough, reliable, reduce downtime and outlast almost any other transmitter on the market,” said Mr Oakes.

Distributed by FITT Resources in Australia, the Labom range brings a safe alternative to the market, and will now be an industry standard throughout Queensland.